The floods that devastated Colorado in 2013 inspired three wine professionals in Boulder to create a new wine called Flood, a tribute to the community spirit that manifested between neighbors and strangers working to rebuild their towns and lives. Brett Zimmerman, a master sommelier, and owner of the Boulder Wine Merchant. Craig Lewis owns Stelvio Selections, a wine distributor in Boulder that relies on a select team of experts and Matthew Cain who owns an exclusive importing company called Derailleur Wines.

We’re all cyclists, and we’ve all been in Jamestown many times,” said Matthew Cain..“It was heavily impacted, and still continues to be affected.” (The Denver Post)

The cyclists, all with long careers in the wine business, decided to combine their different skills to create the inaugural release of Flood Wines.

The first bottling, White Label, includes a Chenin Blanc, Chardonnay, and Pinot Noir. All Flood grapes are grown in Santa Barbara, California and made by Ernst Storm. In January, Flood will release a second bottling, Black Label, an exclusive Pinot Noir. Made by acclaimed winemaker Sashi Moorman, it draws grapes from four different sites: Bentrock, Rita’s Crown, Mount Carmel, and Wenzlau. Twenty-five percent of the wine is whole-cluster fermented, with the aging done in older French oak barrels. 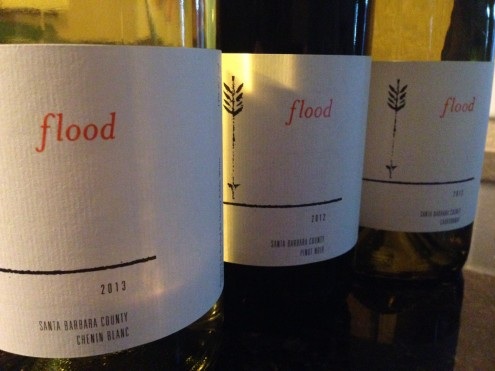